or book an appointment

A history buff from Londonderry~Derry has launched a walking tour of Derry City Cemetery to combat antisocial behaviour and uncover the hidden histories of the City with the support of the Go For It Programme, in association with the Derry City and Strabane District Council.

Seamus Breslin has lived on the doorstep of Derry City Cemetery for decades and his interest in the cemetery began while studying his Master’s degree. He worked on a project about the First World War and discovered many servicemen were buried in the Cemetery.

In recent years, the historical site became a hub for youth crime and vandalism. Headstones were frequently broken or destroyed, and a burnt-out car was once found in the grounds.

Seamusteamed up with local historian Trevor Temple and set up ‘Friends of Derry City Cemetery’ and began taking tours on a voluntary basis as a way for the community to take ownership of the cemetery and combat antisocial behaviour.

He quickly saw the potential in turning the walking tours into a social enterprise and turned to the Go For It Programme to help him transform his passion for local history into a business.

Seamus said: “Derry City Cemetery opened in 1853 and is the final resting place of over 70,000 inhabitants from across the city, including famous merchants from the 19thcentury, victims of the cholera epidemics of the late 1800s, fallen soldiers from both World Wars and those impacted by the troubles.

“Yet, thoughtless acts of vandalism and destruction were becoming increasingly common in the Cemetery. I knew something had to be done. I saw an advertisement on the television for the Go For It Programme and immediately gave them a call. Within days I had worked with them to establish a business plan to transform ‘Friends of Derry City Cemetery’ from a hobby into a viable business.

“We also worked closely with organisations in England and Scotland, who had run similar programmes to open up cemeteries and integrate them within their local communities to help reduce anti-social behaviour.

“Our tour has proven to be a tremendous success and is extremely popular with tourists, schools, and local residents. It focuses on taking visitors on an educational experience that will uncover the hidden stories of key periods in Derry’s history by using this precious location, and its many notable graves, as the historical backdrop.

Our tour has proven to be a tremendous success and is extremely popular with tourists, schools, and local residents.

“We are also working with local communities, historical groups and Derry City and Strabane District Council Museum and Visitor Services to promote the cemetery as a historical and national tourist experience, so that even more visitors will get the opportunity to learn about our City’s rich cultural heritage.”

The Go For It programme is delivered free of charge by a team of experienced business mentors through Northern Ireland’s wide network of enterprise agencies. It provides expert advice and help with developing a robust business plan to help turn ideas into a commercial enterprise.

Schedule an appointment with your local Business Advisor and get started today.

Claire Costello, Business Advisor, Enterprise North West, said: “Seamus initially came to us for help with a business plan, we worked with him to help get the business up and running. Since then, the business has flourished and continues to grow, bringing increased tourism into the city.

“Seamus’s tours has regular visitors from all around the world, as the decedents of former emigrants return to research their roots. His tours are proving to be a big hit on TripAdvisor with a 5.0 rating. He was also recently shortlisted for Londonderry Chamber of Commerce Business Awards, which is an amazing achievement.

“It was a pleasure to work with Seamus – we are delighted to see him turning a passion into a business that’s going from strength to strength and having a genuine positive knock on effect for his local community.”

If you have a business idea you’d like to develop or if you are thinking about starting a business call 0800 027 0639 or complete an enquiry form here to register for a call back. 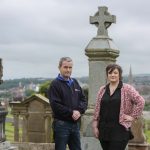 We use cookies on our website to give you the most relevant experience by remembering your preferences and repeat visits. By clicking “Accept All”, you consent to the use of ALL the cookies. However, you may visit "Cookie Settings" to provide a controlled consent.
Cookie SettingsI Understand
Manage consent

This website uses cookies to improve your experience while you navigate through the website. Out of these, the cookies that are categorized as necessary are stored on your browser as they are essential for the working of basic functionalities of the website. We also use third-party cookies that help us analyze and understand how you use this website. These cookies will be stored in your browser only with your consent. You also have the option to opt-out of these cookies. But opting out of some of these cookies may affect your browsing experience.
Necessary Always Enabled
Necessary cookies are absolutely essential for the website to function properly. These cookies ensure basic functionalities and security features of the website, anonymously.
Functional
Functional cookies help to perform certain functionalities like sharing the content of the website on social media platforms, collect feedbacks, and other third-party features.
Performance
Performance cookies are used to understand and analyze the key performance indexes of the website which helps in delivering a better user experience for the visitors.
Analytics
Analytical cookies are used to understand how visitors interact with the website. These cookies help provide information on metrics the number of visitors, bounce rate, traffic source, etc.
Advertisement
Advertisement cookies are used to provide visitors with relevant ads and marketing campaigns. These cookies track visitors across websites and collect information to provide customized ads.
Others
Other uncategorized cookies are those that are being analyzed and have not been classified into a category as yet.
SAVE & ACCEPT